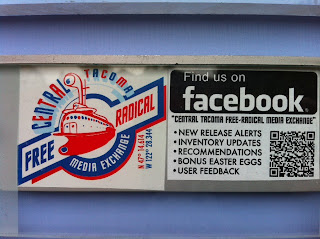 A while back, Tacoma's RR Anderson built a pocket library in his alley called the Central Tacoma Free-Radical Media Exchange. A pocket library is a repository of books, videos, music and all kinds of other media that can be borrowed on a take-something leave-something basis. In my opinion, RR has built the coolest library in town, but more importantly, my kids think it's awesome, too. 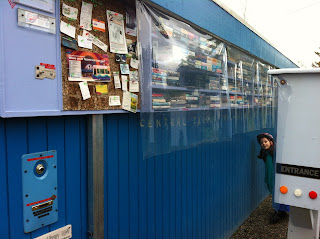 We bike over there about once a month, returning books and cassettes that we borrowed the last time and looking for something new to take. RR has added a second row of shelves and nearly doubled the capacity of the space, which means it's hard not to find something of interest. On our last trip, the oldest picked up a copy of Roald Dahl's Fantastic Mr. Fox, which she immediately began reading on the ride home. 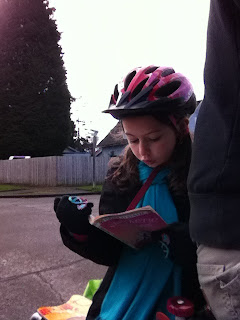 Just a few days ago, like the Lorax rising from the stump of a Truffula tree, a second pocket library sprung up around the corner from my house! It's superbly built and decorated. 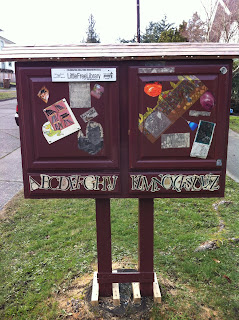 Inside there's an assortment of fiction and non-fiction, as well as a note pad where you can leave comments. I left a note about the CTF-RME and plan to see if I can get the two pocket libraries intertwined somehow. Coincidentally, both of these pocket libraries are located between Oakes and Anderson streets, but 24 blocks apart. 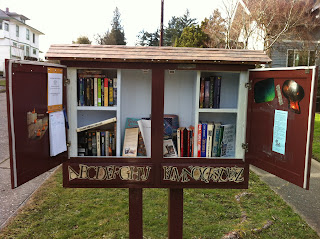 Apparently there are at least four pocket libraries in Tacoma, but here's where to find the two listed here. Take something with you to leave behind! You'll be surprised how empowering this kind of neighborly sharing can be.

View Little Free Library Index > Scroll Down in a larger map
Posted by Matt in Tacoma at 5:10:00 PM

This pocket library development is totally uncalled for. Do-gooders just leaving free books for public use? Nothing positive can come of the riffraff of our fair city reading unauthorized books! All loaned books need to be run though the Public Library System, where the Department of Homeland Security can access the records if need be. And, you Sir, letting a young impressionable mind in your care read a subversive instigator like Roald Dahl? What kind of child are you trying to raise? A music teacher? Unitarian minister? Food bank volunteer? You better use your better judgement and nip this free thinking in the bud.

My mom started a Free Library on her front lawn about 3 years ago - in Minneapolis and it brings her so much joy! Except that someone has started "borrowing" her vintage and collectable books and not returning them. What jerks.
Nice to know this wonderful phenomenon has spread to Fabulous T-Town.