Over at Car Free Days they're talking about how well Xtracycle's Every Day Adventures blog title/concept really captures the essense of bicycle transportation. I couldn't agree more.

Friday, I took two little ones in the trailer across town to visit my dad. They both napped for part of the five miles. The visit was short, but good. Dad gave me a pair of rain boots, which I tucked in the back of the trailer. The awake kids we're now eager to run, so we stopped at a new-to-me park along the route home to let them blow off some steam. With just half a mile to go, my youngest was losing interest in the trailer, just like she loses interest in her carseat, so I pulled over and saved the day with one of these cookies. Always bring a snack and a water cup for the kids!

Saturday I took the small ones to the local pocket park on the MADSEN. We took a slightly longer route home at their request so that we could go down a bigger hill. They love to put their arms up in the air and squeal delightfully on the downhills, something that they don't do in the van.

That night I took my girls on a dusk-light mission in the MADSEN to find the band that was playing Pearl Jam's "Last Kiss" to perfection somewhere in our neighborhood. We made it only five houses down the street before finding the amped trio. We paused to partake, waved our applause, then continued to the UPS campus to play tag. My 4 y.o. loves to go to "the campus" because of all the "teenagers" there, many of them riding bikes. 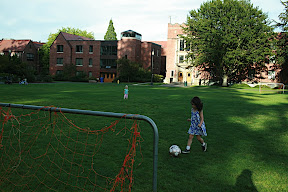 Today was home project day and it required no biking. However, I had a ten minute window after dinner to take a spin on my new-again road bike. I made it four blocks before getting sidetracked by a yard sale. I made a deal on some vintage school desks and told them "I'll be back with a bigger bike." As I rolled up moments later on the MADSEN, the seller said, "Woah, you weren't kidding!" I answered their questions about the bike, which went something more like "bikes are great."

(Those desks were meant to hauled in the bucket, btw. Easiest large cargo load ever and the kids love 'em!) 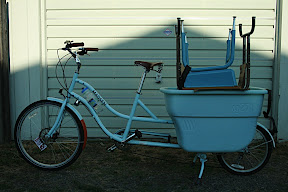 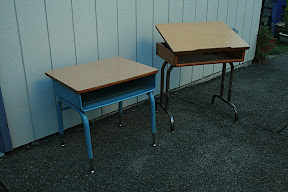 It's easy to make an adventure out of a bike ride every day, especially when you can share the ride with kids. They see things that I would otherwise miss; detours ensue and the line between journey and destination blurs.
Posted by Matt in Tacoma at 8:48:00 PM

Nice stuff, Matt. Love the desks (I wonder if I could get some of those past Anne) AND the cookies (she doesn't have to know about those).

There's something about a yard sale on a bike. Maybe it's because they are so easy to see at bike speed, but you are also normally so limited on space. The Madsen (and the X to a lesser degree) turns that whole problem on its ear!

Here's to more every day adventures!

Love the "I'll be back with a bigger bike!" Gotta say that I think it's great when my guys start the hands-up "WHEEing" when we're riding along in the bakfiets, not so much though when they're on the back of the xtra when we are on a busy city streets...