A Day on the John Wayne Pioneer Trail

I took a day trip to Iron Horse State Park for a ride on the John Wayne Pioneer Trail with my friend Terry. The western end of the JWPT starts at Rattlesnake Lake near Cedar Falls, WA, then heads east over Snoqualmie Pass into the arid plateau of eastern Washington. This was my first time on the trail, so it made sense to start at the beginning. 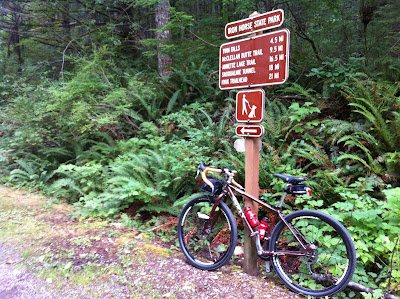 The trail is on the old Milwaukee Rail line, so the grade is very consistent and reasonable. The trail is basically a one-lane gravel road with a well-packed surface. My 29er was overkill for this terrain, but the wide tires help even out the bumps. 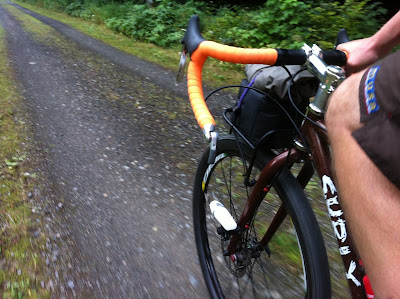 Terry simply put a set of cyclocross tires on his city bike. We both packed along lunches, lights and rain gear and planned to ride 21 miles to the pass summit at Hyak, which included the 2.3 mile Snoqualmie Tunnel. 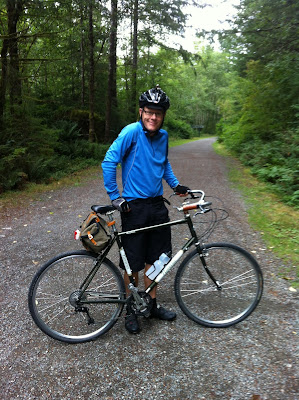 The going was easy and we chatted much of the way. We played tourist, stopping at the trestle bridges and viewpoints. 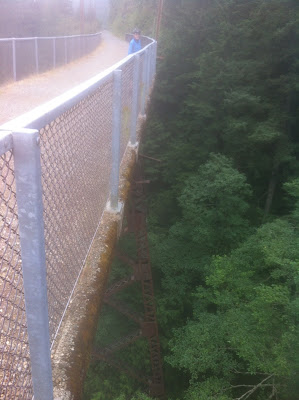 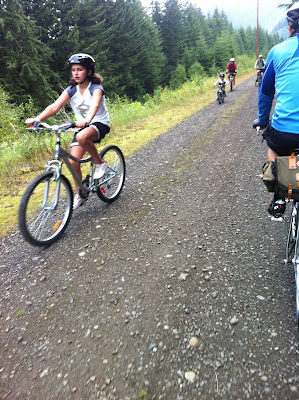 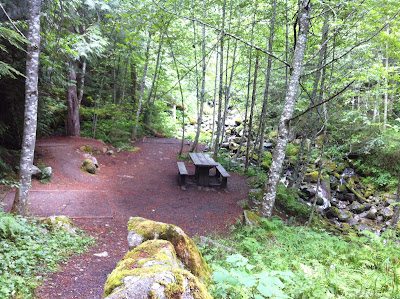 There are several trail-side campsites along the way to Hyak. A father and son told us to check out the Carter Creek site that they had just used. These are all State Park sites, so the fee is just $5/night, and there is a clean pit-toilet bathroom near each location. Family campers should check it out!

The real treat on this ride is the Snoqualimie Tunnel. It has a serious Lord of the Rings feel when you stand outside the entrance. 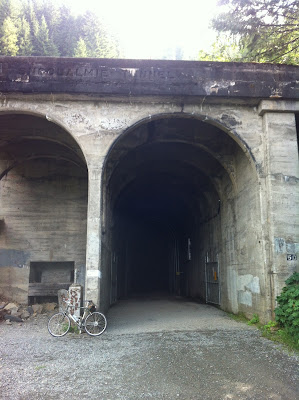 Lights are a must and jackets are recommended. It's cold and dark and a little drippy in there. 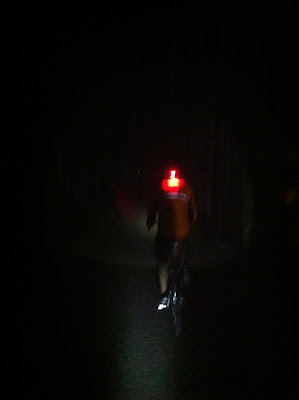 The upper entrance to the tunnel at Hyak is near a big parking lot and is easy to find if you wanted to drive up and just ride or hike the tunnel portion.

It was only 11:30 when we reached the summit, so rather than turn around and head back to Rattlesnake, Terry and I decided to keep riding the JWPT around the southern edge of Kachellus Lake. 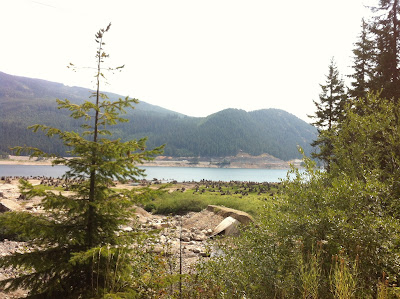 The interstate and its ongoing widening project are on the opposit side of the lake. The trail is quite quiet even though you can see the cars in the distance. It was warming up and we were feeling good (and when were we going to get a chance to ride this trail again?!) so we kept on towards Lake Easton. 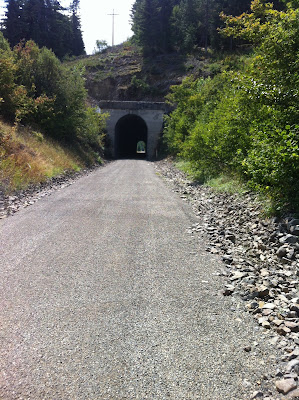 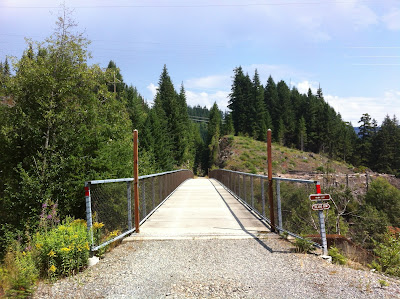 Shortly after crossing this bridge over the Yakima River, we left the trail and headed for Lake Easton State Park. The JWPT continues east around the opposite and more remote side of the lake, but we were already 40 miles into our day and low on water. We would have to see more of the trail another time.

I've been to the Lake Easton campground several times before while riding the Courage Classic. It's another great spot to bring the whole family. 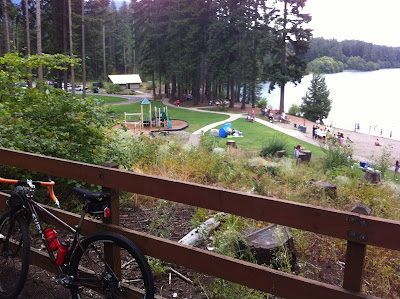 We turned around and headed for home. This is where the photographic part of the story ends, because just a mile later the wind picked up and the rain started. I tucked my camera in my dry saddlebag and then never had a chance to get it back out. The rain turned into a deluge as thunder roared on the rock faces above us and lightening flashed nearby. It's 18 miles from Easton to Hyak and somewhere in the middle it started to hail. I had been saving my rain jacket for the tunnel, but at this point I finally stopped, already soaked, to put it on. My oversized hood fits over my helmet, which keeps the cold water from running down my back. The pea-sized hail bouncing off the hood sounded like I was riding with a popcorn popper in my ears.

This Biblical thunder shower continued for most of the ride to Hyak, with the rain letting up just as we reached the tunnel. Inside, a cold wind chilled my ungloved hands. Its mid-August, why would I need gloves?

Back outside in the daylight and on the descent, we were riding faster. However, the heavy rain had washed away our smooth trail and turned it into a puddled and rutted gravel mine-field. The cold and increased vibration caused my hands and soaked feet to go completely numb. The 18 miles down to Rattlesnake were fast, but not fast enough. My fingers were bone white when we finally reached the trailhead and I could barely squeeze my brakes. The first half of our ride was blissful; this second half was torture.

That being said, the pain wasn't anything that heated seats and a cup of coffee couldn't mend! Our initial 40 mile joyride had become an 80 mile adventure. Even if I had known about the weather we would encounter, I still would have done it. Day trips like this don't happen very often for me and, especially when a good friend comes along for the ride, you have to just keep smiling and go for it. 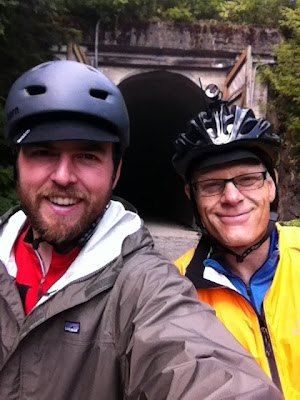 Great ride, Matt. The blog pretty much says it all.... I had so much fun!

what is the ride like from Hyak Trailhead to Easton? Is it relatively flat? Are there detours? If so, where are they? What is the mileage from roundtrip?

From Hyak to Easton, the trail is relatively flat and in good shape. With the gravel, you feel like the ride is the same effort and speed both directions. There are no detours. There is only one small tunnel (pictured above) and it's open. Hyak to Easton is 18mi, so 36mi roundtrip for that leg.

Hey Matt and fellow readers.... if this blog didn't quite get out on the trail, maybe this video will