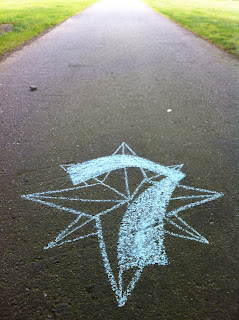 Last Sunday, just before Earth Day 2013, I had a chance to help my friends at 7 Seas Brewing with something called Earth Keg. The Latona Pub in Seattle, in partnership with Feet First (a non-profit promoting walkability), only pours draft beer during the week of Earth Day which has arrived at the pub by people power. Most of the local Seattle breweries that participate use hand-trucks to walk full-sized 1/2 barrel kegs to the pub. In their third year, 7 Seas biked kegs from their brewery in Gig Harbor to the Green Lake neighborhood in Seattle, a staggering 55 mile trip, the farthest journey of any beer in the line-up at Latona.

I met Mike and the 7 Seas crew at the Tacoma-Narrows bridge, where I took possession of my 1/6 bbl keg of British Pale from Mike's bike trailer. That's 5.16 gallons of craft beer; about a 60 pound vessel. Our EdgeRunner cargobike is almost perfectly equipped for this errand. 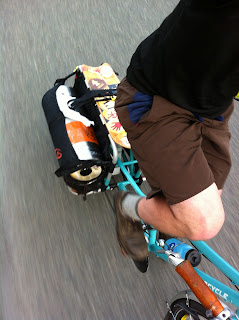 The other two 1/6 bbl kegs were trailered, which made it fairly easy for the riders to simply switch bikes and take turns pulling.

It's surprising how many trails are available for this trip. From the Cushman Trail in Gig Harbor, to the Scott Pierson Trail in Tacoma, to the Milton Trail, the Interurban Trail (even the little piece of it up in Edgewood), and finally the Green River Trail, we didn't take the lane much until we reached south Seattle. 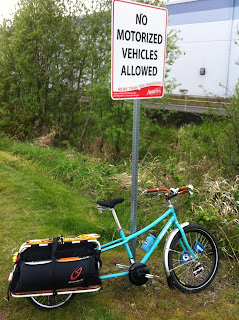 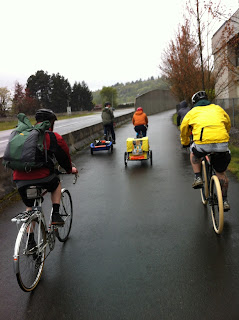 I also brought along some items from The Can Hattery, my tiny nano-business, which were auctioned off to raise a few buck for Feet First. After a few beers and some great food, we all carpooled back home.

Yep, we did not ride home, and I don't think that negates our efforts either. Earth Day is about raising awareness of behaviors and lifestyles that can benefit our planet the other 364 days of the year. I had some great conversations outside the Latona with neighbors and customers who wanted to know more about the cargobike and what we were doing. Folks are wide-eyed about the keg until you tell them that the bike normally carries two children to school and errands most days of the week. Yes, you can walk there. Yes, you can bike there. Yes, you can leave your car parked. And you may even like it.

PS. For local readers who want to know more about bikes-and-beers, be sure to check out the TRH Pint Pedaler event in Tacoma on May 18.
Posted by Matt in Tacoma at 11:27:00 AM